Brightline and Miami HEAT Prepare for 2019-20 Season Tip Off 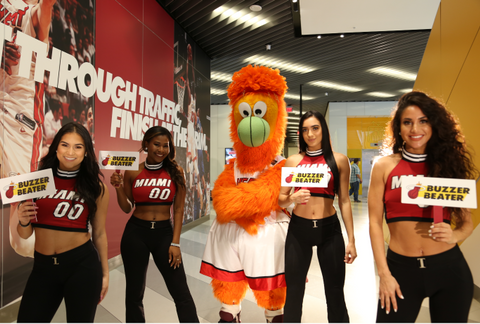 MIAMI (October 22, 2019) -- For the second straight season, Brightline will be providing HEAT fans a true all-star way to travel to AmericanAirlines Arena, with its “Buzzer Beater” service. Bypassing I-95 traffic as smoothly as a power forward driving the lane, Brightline's -- soon to be Virgin Trains -- “Buzzer Beater” is the ultimate mobility solution for fans wanting to go car-free and cheer on the hometown HEAT.

The only private rail service reinventing train travel is the best way to get to and from HEAT games during the 2019-20 season. Beginning with the regular season tipoff on Wednesday, October 23 against the Memphis Grizzlies, the “Buzzer Beater” train service, provides fans with a departure 30 minutes after the final buzzer, letting die-hards catch every second of the action. The service is available for all 41 regular-season games with special activities and events at all stations planned throughout the season.

“Last year, 20 home games came down to the final moments,” said Johanna Rojas, Vice President of Marketing for Brightline. “With our popular 'Buzzer Beater' service, we have established a new tradition for fans in South Florida to get to AmericanAirlines Arena in style and not miss a single moment.”

Returning as an official partner of the HEAT, the “Buzzer Beater” will be available for all home games during the 2019-20 season. The roundtrip service originating at West Palm Beach and ending at Virgin MiamiCentral -- a 5-7-minute walk to the arena -- is the smoothest and most seamless way to see the HEAT take on the NBAs biggest stars.

“The Miami HEAT have a loyal fan base from throughout South Florida and especially in Broward and Palm Beach Counties,” said Eric Woolworth, President of The HEAT Group's Business Operations. “The 'Buzzer Beater' is a worry-free transportation solution and I know our Brightline partner has some exciting new events and activations up their sleeve for the upcoming season.”

Fans taking the “Buzzer Beater” should make sure to share their experience on social by using the hashtags #BrightlineBuzzerBeater and #GoHEATGoBrightline, as well as tagging @GoBrightline.

For a full Brightline train schedule for the 2019-20 Miami HEAT season, be sure to check www.gobrightline.com.

Launched in 2018, Brightline, soon to be Virgin Trains, is backed by Fortress Investment Group LLC and it is the only privately owned and operated intercity passenger rail service in the United States. Brightline connects dynamic, complementary cities and congested corridors that are too close to fly and too long to drive. Providing fast, efficient, hospitality-driven transportation featuring the latest in customer-friendly amenities, Brightline currently operates in Florida between Miami, Fort Lauderdale and West Palm Beach, with plans to expand into Orlando. The Company recently announced that it will construct and operate a new express service connecting Las Vegas and Southern California.